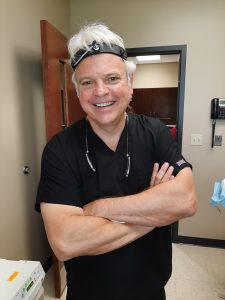 Dr. Steve Quinn, DDS has a special talent that does not involve the Oral and Maxillofacial Surgical Group (OMS) in Branson and Springfield where he practices. He plays the saxophone in the “The M-Dock Band,” a group that performs classic “horn band” tunes, “from Motown and groups like Chicago, Blood Sweat and Tears, Huey Lewis, Van Morrison etc.”

His older brother played the clarinet and was Quinn’s inspiration growing up.

“But I always wanted to put a little twist on his model to have my own style,” he said. “It’s been the perfect musical outlet for me.” 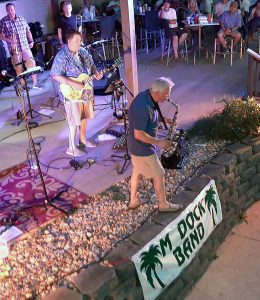 Oral Surgeon Dr. Steve Quinn plays his saxophone with the M-Dock Band at the Catfish Hole in Kimberling City. (Photo by Brenda Meadows)

Quinn grew up in Springfield where he played in the high school orchestra, marching and jazz bands.

“We had a very successful jazz band at Glendale High School and I had the opportunity to do a European tour with that group,” he said. “In college I turned down a music scholarship and chose an academic scholarship instead so that I could concentrate on my pre-medical studies.”

It came as no surprise that Quinn would show an interest in a medical career. His father was a doctor and his mother a nurse.

“There was a lot of medical talk in my family growing up and so my siblings and I had a natural gravitation toward the medical field,” he said. “My brother (Dr. Rodney Quinn) became a neurologist so, here again, he inspired me.”

Quinn chose oral and maxillofacial surgery as a career after watching a television show during his senior year of college.

“They were showing before and after photos of patients who had undergone facial reconstructive surgery of a specific type that we do in my profession,” he said. “It was an immediate epiphany for me.

After an eight year hiatus from music during college and dental school, Quinn, who had never played outside of a school band, got back into playing music while doing his surgery residency with a local band in Wisconsin.

“When I returned to Springfield I started playing with a group of doctor musicians that had a big band jazz group called Caduceus,” Quinn said. “I played with them regularly for seven or eight years.”

After developing a friendship with The M-Dock Band founding member Bill Evans and the band’s lead singer Howard Cotner, Quinn was asked to bring his sax and “sit in.”

“Steve joined the band 26 years ago, and at that time the band had no horn section,” Cotner said. “We all loved how he played and all liked him. He played the next event with us and the rest is history. (He’s a) great sax player, friend and father to a beautiful family. Not a bad doctor either.”

Most of the guys in the The M-Dock Band got into music through the more informal “garage rock band” route.

“One of the things I enjoy most about playing the sax is bridging that gap between the realm of the more formally and technically educated horn player and the self taught garage band musician,” he said. “I consider myself somewhere in between a formally educated musician and a self-taught GarageBand musician. “

The M-Dock Band has “opened” for The Little River Band and Restless Heart. Through his experiences with the band, Quinn has been able to play for Steve Cropper of Staax records and Blues Brothers fame, country artist Johny Lee and Bill Medley of the Righteous Brothers.

Quinn and his wife Linda have been married 35 years. Their two children, Jake and Monica, are pursuing medical careers.

OMS, the oral surgery group that Quinn is part of was started by Dr Rex Witherspoon 65 years ago in Springfield, opened its Branson location in 1995. 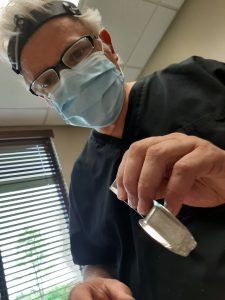 “We just recently completed our own building for that practice,” he said. “I love all aspects of my surgery practice. It just seems like a natural fit for me.”

Performing surgery and playing a musical instrument both require mental concentration and a thought process that transfers to a physical skill, to produce a desired result. Julie Coffey, who assists Dr. Quinn in his office believes he does both very well.

“Working with Dr Quinn is like a beautiful Waltz,” she said. “He leads, I follow, with little to no error. Dr Quinn is a lost art as far as a doctor goes. His love and passion for his patients is a gift. He gives 100% of his attention to each case as if it were his last.”

Quinn believes that whether playing an instrument in a band or performing surgery on a patient takes teamwork.

“It’s a real blessing to have work that feels meaningful, allows the privilege of working with great people striving for the same goal and meeting the needs of so many nice and interesting patients that come from all walks of life,” he said.