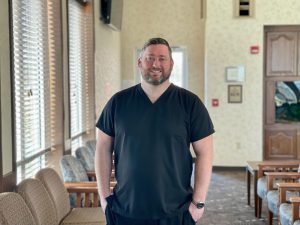 Dr. James T. Shaner joined OMS in 2021 after leaving active military service. He was born and raised in Farmington, MO, where he graduated as valedictorian of Farmington High School, and completed his undergraduate education at the University of Missouri earning degrees in both Biology and History, summa cum laude. He completed his dental education at the University of Missouri – Kansas City where he was a US Army Health Professions Scholarship Program recipient. Following graduation, he entered active military service as a US Army Captain and did a short tour as a general dentist at Ft. Stewart, GA, just outside of Savannah. He then completed his Oral and Maxillofacial Surgery residency at Walter Reed National Military Medical Center in suburban Washington, DC, which included extensive exposure to maxillofacial trauma, orthognathic surgery, and complex implant reconstruction. He was promoted to Major during residency. After graduation, he was transferred to Ft. Bliss, TX where he served as an attending surgeon and eventually assistant program director for the Oral and Maxillofacial Surgery residency program at William Beaumont Army Medical Center. He was also the OMS mentor for the Advanced Education in General Dentistry residency program at Ft. Bliss.. Following the end of his military commitment, totalling 11 years on Active Duty, he and his family were excited to return home to Missouri and join OMS Group. His primary clinical interests include orthognathic surgery, facial trauma surgery, dentoalveolar surgery, and dental implant surgery. He is a Diplomate of the American Board of Oral and Maxillofacial Surgery, a Fellow of the American Association of Oral and Maxillofacial Surgeons, and a member of the Academy of Osseointegration, the American Dental Association, the Missouri Dental Association, and the Greater Springfield Dental Society.

Dr. Shaner is married to his high-school sweetheart, Michelle DuMontier, and has two children. After 11 years of frequent moving with the Army, they’re excited to settle down and make Springfield their permanent home. In his off time, Dr. Shaner enjoys cooking, golf, and spending time with his family.